The Portuguese musician and academic, Manuel Morais, has, through his recordings and publications, brought to my awareness the beautiful music of the diminutive machete. I dedicate this page of my website to the machete, and will include here videos by myself and others, as well as links to important sites. I will try to answer any questions you might have, but all I have learned has come from Manuel – many thanks to him!

First, a video I made on a machete made for me by Canadian luthier, Scot Tremblay. The piece is Clara Polka, from the manuscript of Candido Drumond de Vasconcelos, from Madeira in 1846. I have attempted to use the thumb-only technique for the right hand. See more discussion on technique below. The machete is strung in gut from http://www.damianstrings.com

Now, Waltz No. 4 – note the repeated notes. I alternate index finger with thumb for these passages. Possibly they should be played by an up and down movement of the thumb, but a long nail is required for that technique.

The contents of the manuscript have been published in a book by Manuel Morais, along with a discussion of its provenance and contents –

Cândido Drumond de Vasconcelos: Colecção de Peças para Machete – Collection of Pieces for Machete (1846), published by Caleidoscópio [ISBN 972-8801-16-5]. The text is in Portuguese and English. Well worth hunting down! The music is all in the treble clef, and includes a guitar accompaniment part.

Thanks to Manuel Morais, here are photos of the machete by Octaviano João Nunes: 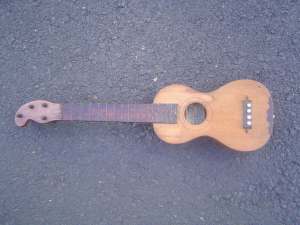 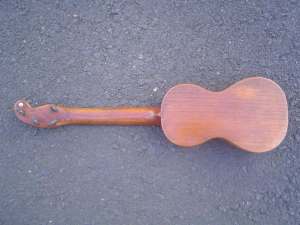 I am very pleased to announce that I have a machete made for me by the Canadian luthier, Scot Tremblay http://scottremblayguitars.com 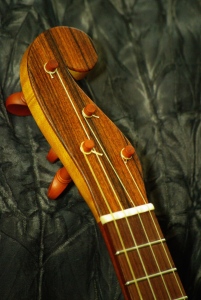 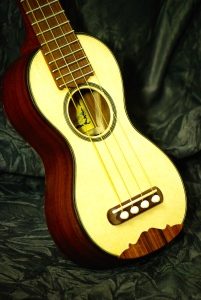 Needless to say, Scot Tremblay is Highly Recommended for your machete!

One performer who explored this repertoire is the great, but sadly now deceased, John King. Here he is performing items from the Drumond Vasconcelos manuscript, on a similar copy of a Nunes machete.


And with voice and flute:


A couple of recordings:

And a little video of Madeira with contributions from a performer and a luthier. This video shows the modern machete technique and physical structure:

The (non re-entrant) tuning from bass to treble is d’ g’ b’ d” – a chord of G major. The technique is discussed in Manuel Morais’s book mentioned above, but the manuscript by Drumond de Vasconcelos is not clear in every respect, and some guess work is involved. Other manuscripts require an e’ on the top string.

There are descriptions of folk players using the thumb extensively, yet there are passages on non-adjacent strings at allegro tempi which require one other finger. Judging by the above videos, some players (as, for example, John King) attempt to use the thumb almost all the time (with some difficulty, it must be said, in some passages), and some players who use a more classical guitar technique of alternating the index and middle fingers, as well as playing the passages in parallel 3rds with the index and middle fingers.

My own instincts have led me to combine thumb work, especially on parallel 3rds passages, with alternating thumb and index in scale and contrapuntal passages. I plant the little finger on the soundboard. As for strumming, sometimes I use the thumb, sometimes the index or middle, and sometimes a complete rasguado of all fingers, with or without the thumb, depending on the passage. The thumb work in the parallel 3rds passages seems to impart a unique flavour to this music, a touch of the folk influence. However, this whole world of the mid-19th century machete is new to me, so I might well revise my technique as my understanding of the subtleties of this beautiful music develops.

The music from the Drumond de Vasconcelos manuscript displays a classical repertoire, typical for the early to mid-19th century, at times sounding similar to the works for guitar of Fernando Sor; but at other times a native folk influence can clearly be heard. As such, I believe the music of this manuscript demands a flexible technique, one able to bring out both the classical and folk elements.

I have tried to play the pieces while using a thumb pick, or thumb and finger picks, but found many passages impossible to play – either physically impossible, or not to a level of what I would describe as being musically acceptable. I’ll leave the picks to others more skilled in the practice than I.

Please return later in the year, as more videos and commentary will be added.