Robert Bremner (c.1713-89) is on record as being the first to write and publish a serious tutor for the guittar. There had been one or two previous ‘tutors’ such as the ‘Ladies Companion’ containing one page of text, but Bremner’s Instructions for the Guitar (Edinburgh, 1758) has 28 pages, half of which is given over to detailed account of the instrument and its techniques.

Bremner is alone in Scotland in refering to the instrument as a ‘guitar’. At one point he states that the instrument has only recently come into Britain, indicating that it originated elsewhere.

Bremner is also the earliest author to discuss the ‘cross-string trill’ which has become fashionable of late. Basically it involves playing the two notes of a trill on adjacent strings. Bremner states that he learnt the technique from listening to harpers. He also mentions the technique of dragging the index finger from treble to bass, usually on the open string chord.

Instructions for the Guitar (Edinburgh 1758, with at least two reprints)
Twelve Scots Songs
Songs in The Gentle Shepherd
The Art of Playing the Guitar or Cetra by Geminiani (Edinburgh, 1760)

INSTRUCTIONS FOR THE GUITAR by Robert Bremner, Edinburgh 1758

Here (with the kind permission of Cardiff University Library) is a facsimile of Bremner’s influential Instructions: Bremner Instructions Cardiff (PDF) but without the text, which I include here: Bremner Text Instructions . NB – My complete recording of this publication can be heard on the Recordings page.

~Twelve Scots Songs for a Voice or Guitar with a Thorough Bass, adapted for that instrument By Robert Bremner~

Contents: My Apron Deary; Down the burn Davie; Tweed Side; I’ll never leave thee; The Broom; Gallowsheels; Lochaber; Ann thou were my ain thing; Birks of Envermay; The Lass of Peaty’s mill; The last time I came o’er the Moor; Peggy I must love thee. This collection is a veritable ‘Greatest Hits’ package of the 18th century. I will try and get permission to publish this work here in the near future.

~Songs in The Gentle Shepherd~

‘The Songs in the Gentle Shepherd. Adapted for the Guitar by Robert Bremner. Edinburgh. Sold at his music Shop. Where may be had. Instructions for Guitar Pasquali’s Art of Fingering the Harp’d Pasquali’s Thoro’ Bass Craig’s Scots Tunes with Variations Adapted for the Harp’d Scots Songs for a Voice & Harp’d 2 Books McGibbons Scots Tunes for the Violin or Ger. Flute. 3 Books Curious Scots Tunes all with Variations for the Violin & Bass Also. Guitars & all other Musical Instruments at Reasonable Rates NB: If any such passeges as have chords or double notes are found difficult, let the Performer play only the highest note, as it compleats the Air of the Tune without the others’ [NLS Glen104] 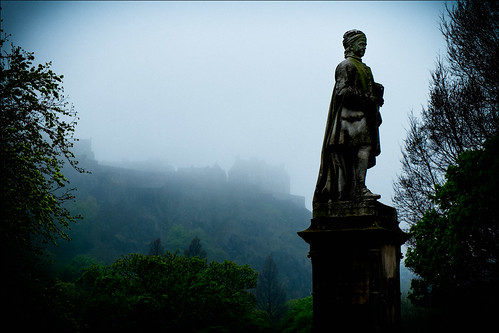 Allan Ramsay’s statue, the image of a confident and learned man, stands today in Princes Street Gardens, Edinburgh, overlooking the New Town, which in his day was open land stretching north to the Forth river. Ramsay flourished at a time when Scotland was still reeling from the intrigues which had brought into existence the political Union with England. Scotland had, within a few short dynamic years, lost her proud independence, and her domestic political power. The hoped-for rise in wealth, promised by the English, had not materialised, and many Scots soon began to see themselves bereft of control over their own destiny, and, possibly much worse, had no sense of a communal identity. Not only were the political and constitutional structures crumbling at an alarming rate, but the very notion of Scottishness was under a viscious attack. To the defence came three poets: Allan Ramsay (1684-1758), Robert Fergusson (1750-1774), and Robert Burns (1759-1796).

This literary triumvirate revitalised not only the rauckle Scots Tongue at a time when many of the middle and upper classes were doing their utmost to rid themselves of any traces of their native language [that towering genius of the Scottish Enlightenment, David Hume, for example, spent many a destructive hour crossing out all the Scots words in his writing. Others even went so far as to compile lexicons of Scots words which, the reader was advised, were to be avoided by Scots writers, but which have become, in a wonderful poetic irony, a rich source of 18th-century Scots vocabulary for modern-day lexicographers!], but also revitalised a national sense of identity. In this respect alone, the most important was not, as might be expected, Burns, who flourished towards the end of the 18th century, and whose debt to his two predecessors he freely acknowledged, or Fergusson, whose own enlightenment was extinguished by his tragically premature death, but by Ramsay, author of two phenomenally successful publications: The Tea Table Miscellany (1724-37) and The Gentle Shepherd (1725).

According to Dwyer, ‘Allan Ramsay’s ‘The Gentle Shepherd’ is nowadays familiar only to students of Scottish literature, but his quintissentially Scottish pastoral constituted a revolutionary exploration of the connections of community in village, neighbourhood and nation.’ And again: ‘[The Gentle Shepherd is a] work which, more than any other, can be said to have initiated and sustained the remarkable Scottish cultural renaissance of the 18th century.’ [‘The Age of the Passions. An Interpretation of Adam Smith and Scottish Enlightenment Culture, John Dwyer. Tuckwell Press, East Linton, Scotland 1998. ISBN 1898410178.]

Bremner’s edition for guittar and voice of songs from The Gentle Shepherd, appearing some thiry five years after the first publication of the pastoral, is testament to the continued popularity of the play, its music, and its sentiment. It is also a very interesting publication for guittar and folk historians. Eighteen songs are included, and the following footnote appears after the last: ‘NB. Such other Tunes as belong to this Comedy, are already printed in the Publisher’s Instructions for the Guitar.’

The accompaniment style has the guittar playing in unison with the voice – a much favoured folk style – with occasional use of thirds and cadential chords. A more ‘classical’ style is favoured in William Wilson’s ‘New Selection of the Most admired Songs for the Guittar’ but mention should be made here that Bremner’s chosen style is perfectly in keeping with the sentiments of the songs: simple and direct. The sustain and resonance of the guittar would fill out the sound with a tonal warmth that never threatens to detract from the voice, and, most importantly, the words. As is often the case with the more folk inspired guittar arrangements, what looks sparse and uninteresting on paper can in performance be very moving and have a sense of authenticity lacking in more scholarly arrangements. [I have given performances in folk clubs in Fife of some of these songs, accompanying traditional singers who would have shouted me offstage had I played more notes than was required to outline the melody.] Such a style of accompaniment could only really work successfully with wire strings. Both gut and its modern-day equivalent, nylon, lack the drone-like quality which wire can bring, especially when tuned to an open string tonic chord. From this perspective, Bremner’s accompaniments are at once perfect and masterly, and indicate more than a passing familiarity with the folk idiom. Furthermore, the publication of such a style of accompaniment is an indication of how popular the folk style was with the middle-class, sheet music buying public. Another advantage is that the guittar parts could be played as solos without the voice, thereby supplying a source of popular traditional melodies. And, of course, a further advantage is that a simple accompaniment is simple to play, relative that is to the arpeggios and scale runs which feature in William Wilson’s edition referred to above. Clearly the melody took precedence over all other considerations, as is made explicit by Bremner on the front page of the edition: ‘NB: If any such passeges as have chords or double notes are found difficult, let the Performer play only the highest note, as it compleats the Air of the Tune without the others’

The tunes chosen by Ramsay are all traditional and are cited before the commencement of the song. Here is a list of the songs with their respective tunes: Song Tune 1. My Peggy is a young thing – Waking of the Faulds 2. Dear Roger if your Jenny geck – Fy gar rub her o’er with Strae 3. The dorty will repent – Polwart on the Green 4. O dear Peggy loves beguiling – O Dear Mother &c 5. How shall I be sad when a Husband I hae – How shall I be sad on my wedding Day 6. I yield dear lassie you have won – Nansy’s to the Green wood gane 7. The Laird who in riches and honour – Mucking of Geordy’s Byr 8. Cauld be the Rebels cast – Cauld kale in Aberdeen 9. Peggy now the King’s come – Carl an’ the King come 10. When first my dear Laddie gade – Yellow hair’d Laddie 11. By the delicious warmness of thy mouth (no tune title) 12. Hid from himself now by the dawn – Happy Clown 13. Were I asur’d you’ll constant prove – Come hap me with thy Pettycoat 14. Well I agree ye’re sure of me – O’er Bogie 15. Duty and part of reason – An the Kirk wad let me be 16. Speak on speak this, and still my grief – Woes my heart that we shou’d sunder 17. The bonny gray ey’d morning – Bonny gray ey’d Morning 18. My Patie is a lover gay – Corn Riggs are bonny

~The Art of Playing the Guitar or Cetra~

I will return to this unique publication later.

I went into more detail on Bremner’s guittar publications in my paper for the First International Symposium on the Guittar, Evora, Portugal September 2001. All papers from that symposium have been published : Estar Publications