Frank Leo Littig (1878 – 1967) is a neglected master of the tenor banjo – something this page attempts to address. I came across a folio of solos by him from 1924, which I thought were definitely worth sharing with people. My cyber-friend, Marc Smith, was inspired to do the background biographical research. And so, between the two of us, here we present a snapshot of the life and work of Frank Littig.

I have made a number of recordings of Frank’s music, including videos, below. But first a little survey of his banjo books. He was also known for various ukulele books. None of the books I’ve seen have a picture of him, and I’ve been unable to find one online. If you know of one, please let me know.

The books I could find reference for, which include reference to banjo in their title, are:

There is also a similarly titled, “Littig’s New Harmony Self Instructor – Diagram Chords and Strokes for Banjo “C” Notation”. I’ve no way of knowing at present whether this is for Plectrum, 5-string, or Tenor banjo: 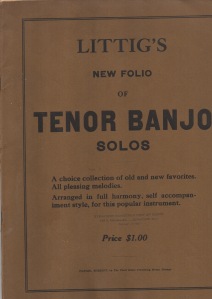 Littig’s Practical Method for the Tenor Banjo, 1925 (56 pages) – I would dearly love to get hold of this edition. Please let me know if you see one.

National self teacher for a diagram system : chords for ukulele, banjuke, steel guitar and tenor banjo, 1925

National Self Teacher for Banjo Chords, 1925 (this might be the same item as the above)

Littig’s folio of solos for tenor banjo or tenor guitar, 1926 – this I would also like to get hold of.

Here are my free TAB and Standard Notation pdf files. They’ve taken me a little while to put together, so I hope you treat them with respect. Frank’s music is idiosyncratic, at times simply beautiful, other times bordering on the bizarre. He clearly had a command of the instrument, and a good sense of humour.

I found Frank in the following records:

1910 Census: Age 32, living in Denver, CO. Occupation: “Mattress Maker”. His mother Augusta and sister Mamie are also found living in Denver in this Census, but in a different house.

Frank’s paternal ancestry is French. His paternal great-grandfather, Peter Littig was an ardent supporter of Napoleon, fought at Waterloo, etc. He emigrated to American (Davenport, IA) after Napoleon’s last hurrah.

The Littig family was prominent in both Rock Island, Illinois and Davenport, Iowa (which are merely separated by the Mississippi River). A family home (built by Great-Grandfather John Littig) in Davenport, IA still exists and is on the National Register of Historic Places.

Frank’s maternal line is mostly German, he has one Civil War veteran (Union), Grandfather Ferdinand Gehrt (1825-1916), who fought in the 116th Illinois Infantry.  Ferdinand is listed as a “Furrier and Cap maker” in the 1850 Census.

“I met him when I was 5 years old in 1937. He was living in Whittier, CA and worked in Hollywood in the film industry. He played guitar in bands and was an extra in some movies 1935-1940 era. He was my Grandmother’s brother, my Father’s Uncle. He did write some music for movies but I don’t have any of them.”

More videos and scores to be added.